This week we were divided into our groups to work on experimenting with projection mapping to help stimulate ideas for our film.  Each member brought in different items to investigate with. We had a selection of textiles, CD’s, cellophane, cardboard, cotton wool etc. 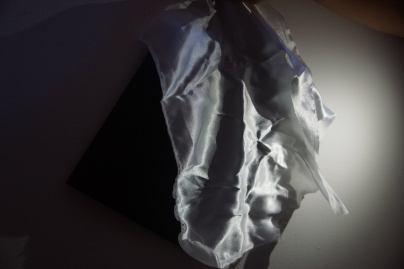 Our goal was to zoom up close on an object and project light on it. After trialing we decided on using the silk that had previously been creased and project light on it we moved to a space where there was not much light and used a white blank wall as the backdrop. We were using a flash torch on a iPhone to get direct lighting whilst another member toke the photos. This merely gave us light and dark shadows we were after something more stimulating to provoke a sort of eerily mood. We then decided to use the back of the CD and overlaid it with different coloured cellophane by doing this we were able to create torrents of colour to blend in with the shadows caused by the light. The use of excessive shadow contrasts and the colours of the CD with the cellophane looked great on the silk textiles. The light and shadow created beautiful folds and shapes which were great to then mask on Photoshop.

We then proceeded to mask the image on Photoshop, using the shape formed by the background. This gave us ideas for our final video the idea of using light to show case emotion and movement this activity also highlighted the use of negative space. As we started with over 5+ items in the photo and it was nowhere near as effective as our final photo using only one item.

View all posts by sarahelizabethhawes

Lost In Lacuna. We are a group of four: Karina Huang, Chloe Mottau, Haesun Kim, and Sarah Hawes.