Eternal Sunshine of the Spotless Mind

Eternal Sunshine of the Spotless Mind, directed by Gondry and written by Kaufman, explores the tenuous nature of love, loss, and memory. The plot revolves around Clementine (Kate Winslet), and Joel (Jim Carrey) , In the beginning they meet in Montauk on the beach, and start to fall in love. As the movie progresses, it’s revealed that they were two lovers who had had their memories of each other erased. As Joel’s memories of Clementine turn backwards he realises that he doesn’t want to lose them and wants to try again. Lacuna is the name of the company in the movie that erases the memories.

Throughout the film, the mood varies from melancholy and depressed, whimsical and romantic, to panicky and nervous. One of the most prominent and my favourite scenes in the movie is a sweet and peaceful moment that occurs on the frozen Charles River with Clementine and Joel on their “second date.”

The dark, open space surrounding Clementine as she stands on the frozen river and beckons Joel forward is symbolic of the open possibilities and mystery that surrounds her. Joel, has a more detailed background of trees, which shows his  nervousness as he’s about to jump into this new situation.  As they both venture out onto the ice and lie down, only Joel and Clementine and the ice are visible. To the left of them, there is a rather large crack in the ice. This crack is symbolic because it represents something being amiss in this seemingly perfect moment. 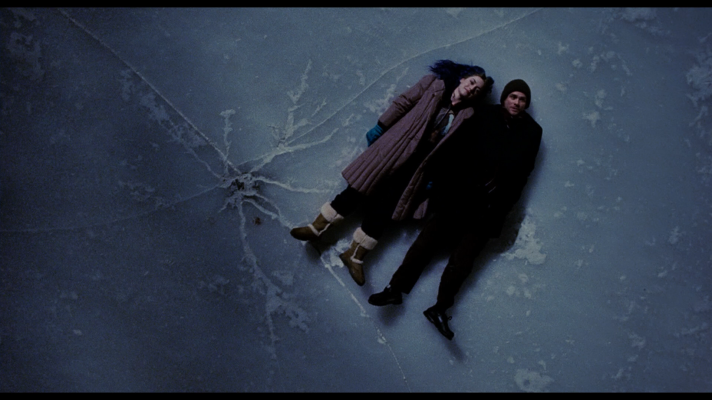 The natural silver light that is present in the scene is assumed to come from the moon.  A soft light seems to be produced from Clementine. Technically this can be argued because of the light coloured clothing she is wearing juxtaposed against the dark night. However it can also theoretically represent the inner light and full of like Clementine as a character possess. The filming in this scene appears to be of a hand held camera style of shooting . This gives the feeling that you are there and you are watching this scene take place. This shooting style is kept even as Joel and Clementine lie on the ice.  Through analysing this scene I became aware that the camera is actually moving in the slightest bit although to the un trained eye it would look as if the scene was at a standstill point in time and perfect.

The music in this scene is important as it starts out with just just ambient noises making the audience pay attention and creates a mood of wonder. I was able to notice the importance of the silence due to researching sound for our film as breaks of sounds is a technique we use in our film to keep the audience interested and guessing. As the scene progresses, romantic music begins to play, heightening the visual connection that Joel and Clementine are experiencing.

This film allows you to choose the ending. Joel and Clementine are happy in the end, but the viewer has no idea whether that’s temporary or not. So, this movie effectively splits people up into two groups: those who believe Joel and Clementine will learn from their mistakes and be happy together, or those who believe that it’s inevitable that they will be unhappy again. Eternal Sunshine is about how happiness from ignorance is not happiness at all. As a viewer I learnt from this film that pain is necessary. You have to acknowledge that when you fall in love, you aren’t agreeing to be happy. You’re agreeing to be vulnerable.

The Guardian. 2017. Eternal Sunshine of the Spotless Mind: No 8 best romantic film of all time | Film | The Guardian. [ONLINE] Available at: https://www.theguardian.com/film/2010/oct/16/eternal-sunshine-spotless-romance. [Accessed 17 May 2017].

View all posts by sarahelizabethhawes

Lost In Lacuna. We are a group of four: Karina Huang, Chloe Mottau, Haesun Kim, and Sarah Hawes.